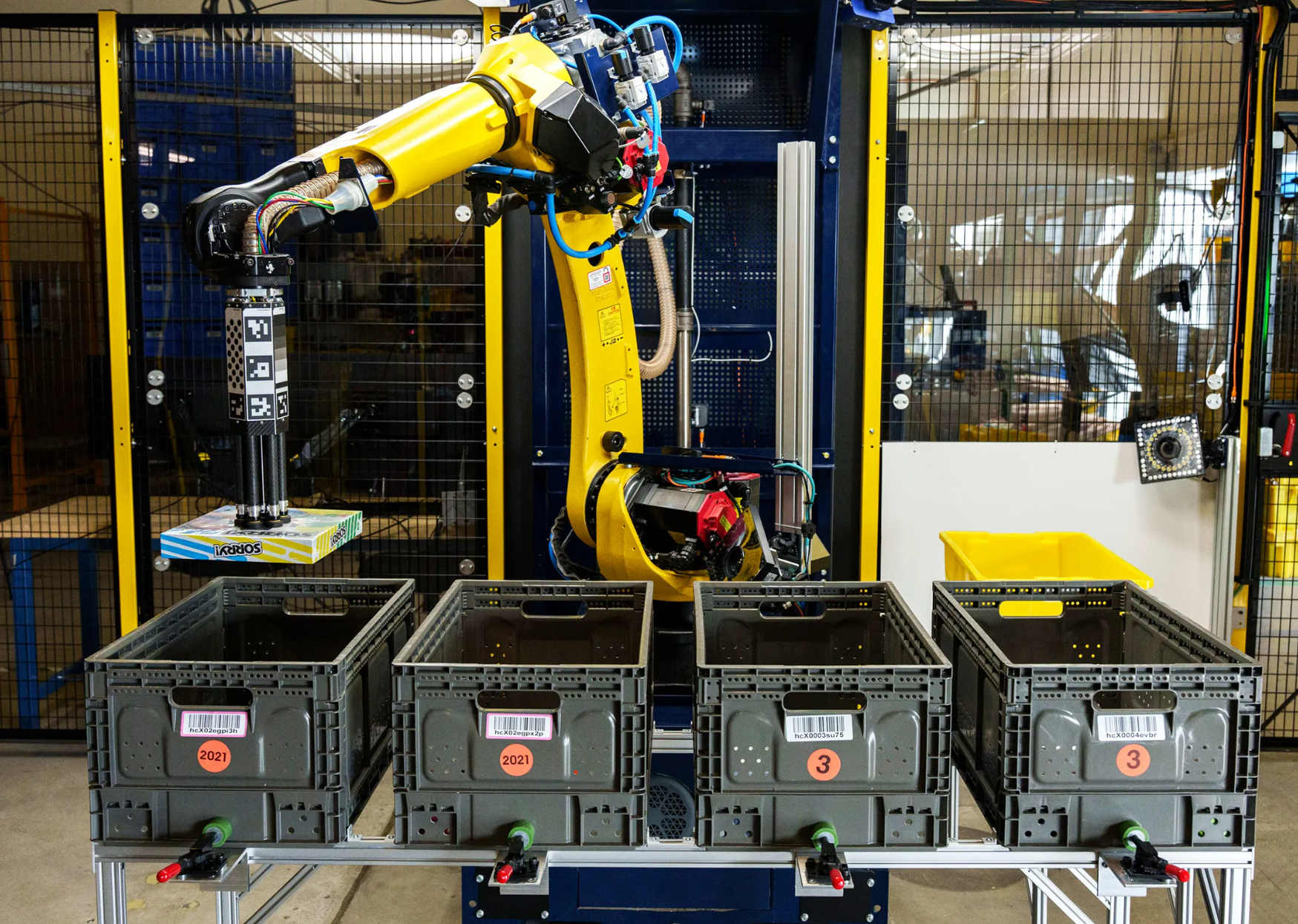 EXTERMINATE! EXTERMINATE!! No no no! This isn't that kind of robot! Amazon's Sparrow robot is here to help and uses machine learning algorithms and a custom gripper to take on those tedious mind-numbing work tasks.

During the Delivering the Future Conference in Boston, Amazon showed off Sparrow, a new robot that will one day play a crucial role in helping Amazon workers by handling some of the more tedious and mentally draining tasks found in a warehouse environment.

According to Amazon, Sparrow, uses artificial intelligence and computer vision to move products before they're put into a crate. In a video shown at the event, the robotic arm was shown picking up a board game, a bottle of vitamins, a set of sheets, and other typical items that you'd find in a company warehouses, and then placing those items in crates.

Sparrows arms have been designed specifically to pick up boxes that are generally uniform in shape. However, according to Jason Messinger, the company's robotic manipulation manager, Sparrow does have the ability to handle items that have varying sizes and curvature.

To grab items, the robot uses suction cups that are strategically placed on the arm where it can then firmly pick up products in the same way an octopus uses their own suctions cups on their tentacles to grab a fish or an object.

“This is not just picking the same things up and moving it with high precision, which we’ve seen in previous robots,” said Messinger.

In 2012, Amazon acquired robotics company, Kiva Systems for $775 million and since then they have been adding more robotics to their warehouse infrastructure. Over time Kiva evolved and became Amazon Robotics, which is Amazon's in-house incubator of robotic fulfillment systems.

With global initiatives like the Artificial Intelligence Act pushing warehouses to create a safer and more efficient work process through AI, robotics, automation and XR technology, it only makes sense that Amazon, the second largest employer in the U.S. behind Walmart, embraces and adopts more robotics technology for their workflow.

Along with Sparrow, Amazon also showed off a fleet of other new robot models. They also featured a variety of other innovations that Amazon believes will help improve the efficiency and effectiveness of its operations.

Using robots like Sparrow isn't about replacing the human workforce. As a matter of fact, Amazon is still very much invested in their human workers. In a recent post on the Amazon blog, the company talked about their employees saying:

The design and deployment of robotics and technology across our operations have created over 700 new categories of jobs that now exist within the company—all because of the technology we’ve introduced into our operations. These new types of roles, which employ tens of thousands of people across Amazon, help tangibly demonstrate the positive impact technology and robotics can have for our employees and for our workplace. Supporting our employees and helping them transition and advance their career into roles working with our technology is an important part of how we will continue to innovate.

The company even offers an Amazon Mechatronic and Robotics Apprenticeship, a 12-week classroom apprentice program, which is covered by Amazon, is followed by 2,000 hours of on-the-job training and industry-recognized certifications, helping their employees learn new skills and pursue in-demand, technical maintenance roles in robotics.

The company's vision is to use robotics like Sparrow to reduce its reliance on front-line workers by implementing more automation in its fulfillment centers. This will allow Amazon to improve the efficiency of its operations and reduce their dependency of relying on a labor force. According to a recent Recode report the company is worried that they may run out of workers to hire by 2024.

In June, Amazon unveiled its first fully autonomous robot, which can work alongside warehouse workers. It also introduced other systems that can move packages. The company acquired Cloostermans, which develops warehouse machinery and robotics.

According to Amazon, about 75% of the items that the company's customers receive through its delivery process are handled by robots like Sparrow. So next time you're up late at night scrolling through Amazon and you decide to finally buy those VR accessories, there's a good chance a robot picked the item for you.