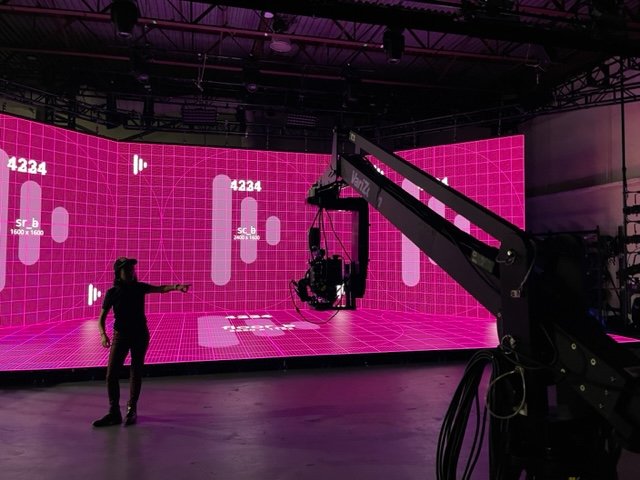 This XR Space is Impressive

The XR stage is designed to spark creativity, and lets TV and film studio unlock their ideas

Part of the FS Studio team was in NYC this week to work with recruiters in multiple industries by showing them how XR technology can help them source new talent and keep employees engaged with meaningful training, and how a virtual hub can connect remote teams.

While in NYC, we took a moment to head on over to Brooklyn to join an ARHouseLA NYC meetup to hangout with AR and VR creatives, and to check out the massive 40,000 sq. feet XR art space, ZeroSpace, a facility that features a fixed-install LED XR Stage, a Vicon Motion Capture Stage, and rentable warehouse space for film/photo shoots and live event production.

Not only do they have an amazing motion capture stage, but they also have this massive XR stage that produces really amazing XR footage.

Check out our tweet below showing video of it in action and its scale.

Elena Piech, an XR/Web3 Producer at ZeroSpace gave attendees a tour and talked about the work being done there and how they use the space for TV, film and corporate events saying, "the space is designed to spark creativity, and lets TV and film studio unlock their ideas."

Of course we've seen large productions such as Disney's The Mandalorian and Warner Bros. The Batman use virtual sets to be able to control the environment and speed up the filming process by simply switching virtual locations with a simple click on the computer using Unreal Engine.

According to a VRScout article, creatives used Unreal Engine’s new production tool to manipulate the entire scene, including all the special fx, and it can be changed live on set in real-time. In one example provided by Unreal Engine during a commercial shoot, a rock in a scene needs to be moved to help with the camera shot. To do that, the filmmakers simply just pick up the rock and move it, virtually, through a device such as an iPad.

Creators also have the power to change things such as lighting with a simple fingertip gesture. Slide your finger up, down, left, or right and the lighting angles change in a way that will impact the CG environment as well as the actors and props; with just a few simple gestures you can instantly change the time of day from sunrise to nighttime.