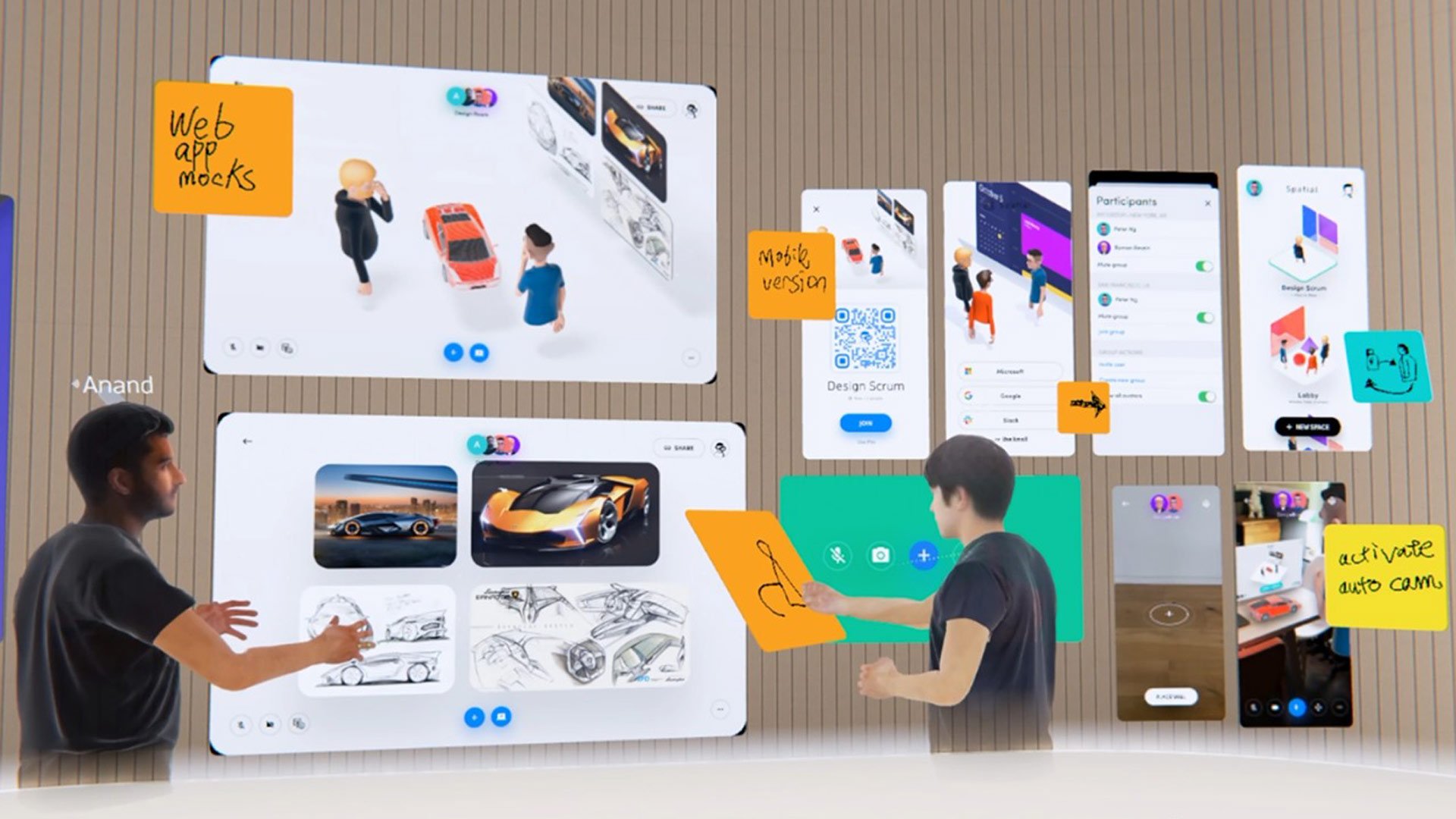 As 2022 comes to a close, it’s important that we look at how XR technology has had an impact on the workforce this past year and what does the idea of the metaverse mean for our future?

There’s a lot of excitement behind the idea of a metaverse. Or maybe you call it virtual reality (VR), digital twinning, or immersive worlds. With all these names, it’s obvious that there is still a lot of confusion of what it is. This post isn’t about defining it, instead let's focus on how interactive digital content will impact work in 2023 and beyond.

Powerful new technologies can be unsettling, but they also bring excitement, and there is understandable misunderstanding about how these changes will affect people, companies, and industries.

One company that is advocating for this approach and embracing the excitement is Meta. To help them understand what all of this means to them, the company conducted a study with over 2,000 participants from various countries.

The results of the study revealed that 66 percent of the participants believe that VR technology will help recreate the feeling of togetherness in the office. Despite the misunderstanding about the metaverse, people are still excited about the potential of these new tools.

To get a deeper understanding of the study's findings, Meta conducted a panel discussion with some of the industry's most prominent thought leaders from different industries, and spoke with those individuals who will lead the development of the metaverse in the workplace in 2023.

According to the experts Meta surveyed, they see an increase of remote workers with a third of the workforce working from home. The increasing number of employees who are working remotely will redefine the way people are integrated into the workplace.

As more companies adopt a hybrid approach to working, this trend poses a challenge for business leaders. According to a survey, only 19 percent of employees claimed that videoconferencing can improve their presence in meetings, while 15 percent believe it can increase collaboration.

“Companies need to think about the immersive experiences that will support distributed teams and build culture and connection in a virtual environment,” said Brynn Harrington, Meta’s vice president of People Experience.

The survey results revealed that 69 percent of workers and leaders would like to see meetings become more engaging and immersive. Furthermore, 55 percent believe that it should be easier for people to join virtual meetings while they're on the go. This means easy access to interactive virtual meetings via an AR or VR headset, mobile device, tablet, or laptop.

“We are building for the metaverse in a way that works across 2D and 3D surfaces; is interoperable across devices, from mobile and desktop to VR; and suits a range of user circumstances, such as working in the field or on the go,” Harrington added.

Modern work is not a one-size-fits-all solution. It requires a different approach to develop and implement new technologies that will benefit employees and society in general.

The results of Meta’s survey revealed that 66 percent of workers believe that the metaverse will help bring back the feeling of togetherness in the workplace. Jacob Morgan, a noted speaker and futurist, said that leaders should adopt a chef's mindset when it comes to adopting new technology.

According to the survey results, 83 percent of workers are happiest when they feel like they are included, and 80 percent of them are satisfied with a collaborative atmosphere. These kinds of sentiments will likely be reflected in the company's spending plans when it comes to using AR and VR hardware to access a virtual collaborative work environment.

Due to the increasing number of workers demanding the use of virtual and augmented reality, Morgan predics that businesses will start investing in these technologies in the same way a company issues a company owned laptop to their workforce. According to Ryan Cairns, the vice president of Metaworks, businesses will start to see the hardware budgets for laptops being used for the first time for VR headsets.

The survey results showed that over three-quarters of leaders have allocated a significant amount of their tech budgets for the development of virtual reality and augmented reality, with over 80 percent saying they expect that the figure will increase over the next couple of years according to Alaa Saayed, senior program director of Digital Content Services at consulting firm Frost & Sullivan.

“For 2023, specifically, we expect more businesses to move from proof of concepts to full deployment of XR technologies to boost work efficiency and enrich communications and collaboration,” Saayed said.

According to Cairns, the survey results are a significant validation of the technology's promise. He noted that even in the early days of the metaverse, the feeling of presence that people get from virtual reality is better than that from video chat. The ability to bring people together and improve processes is exciting and will only get better.

“From truly democratic meetings that engage everyone directly, from the shop floor to head office, or by enabling designers to interact with physical holograms in 3D form instead of leaving text-based feedback, the opportunities for more immersive, engaging touchpoints are endless,” Cairns explained.

Even if the goal of virtual reality is to reduce video fatigue, he noted that there will be more features that will make working in VR more productive. There will be more collaboration across industries to develop technology that enables companies to provide their workforce with immersive experiences.

The rise of the metaverse marks the next generation of how we connect online. It enables us to create a deeper sense of social presence and experiences that are built for all kinds of devices and screens.

“The reality is that companies have increasingly decentralised workforces, and the technology that exists today doesn’t solve the need for that human connection that enables the best collaboration and productivity,” observed Ash Jhaveri, Meta’s vice president of Reality Labs Partnerships.

The metaverse will be an open ecosystem that enables rich and immersive experiences that are interoperability and accessible. Meta's partnership with Accenture and Microsoft will allow companies to take advantage of the power of virtual reality and start using it in their operations.

According to Jhaveri, there will be more companies partnering with Meta to deliver solutions that will enable their teams to perform better using virtual reality. He noted that there are at least a couple of things that every enterprise could do that would be significantly better using 3D.

Those that do not have the necessary technologies in place to support mixed reality and virtual reality on their roadmaps may find themselves at a disadvantage compared to early adopters. According to the survey, over 60 percent of business leaders said they are behind their competitors when it comes to planning for the Metaverse, and over half believe that these technologies will improve work-life balance.

Early adopters of the metaverse will start using virtual reality (VR) and mixed reality (MR) to enhance their company culture and improve their workforce. These technologies will allow them to make their operations more accessible, manageable, and inclusive.

According to Trodella, immersive training is a relatively low-cost and immediate value solution that can be used to improve a company's workforce. Over 70 percent of business leaders expect to be able to hire talent from other countries through the metaverse. Trodella noted that these technologies will also allow them to improve their team meetings and productivity.

Another thing to note is that in 2022, we saw some pretty big milestones with XR technology. The Meta Quest Pro and the Pico 4 headset both delivered a full color passthrough experience and we saw big improvements with eye-tracking, facial-tracking, and hand-tracking technologies.

2023 is already stirring up big buzz with the announcement of HTC’s new mixed reality (MR) headset, and of course there is the rumored Apple MR headset which seems like it will finally be released later in the year.

However as important as the hardware is - for now - this is about adoption of taking 2D data and turning it into an interactive 3D world where you can collaborate with co-workers anywhere around the world, have a feeling of being present in a shared virtual hub, being able to use XR as a way to create better workflows, keep employees safe, and predict different outcomes without costing you money.

We live in a digitally connected world, and we are becoming more and more connected each day as technology grows. Don't let your company fall behind.