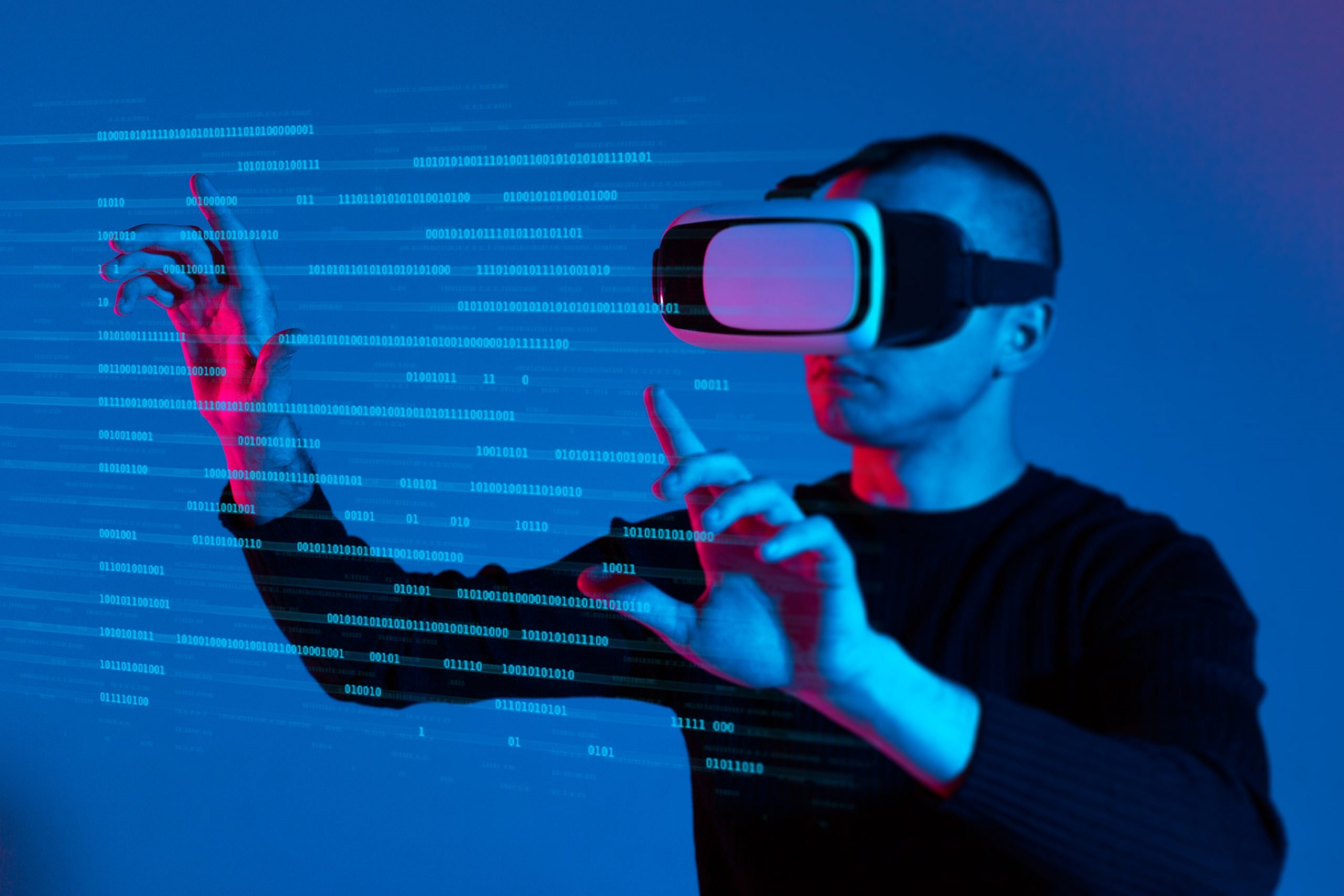 Why Should You Be Paying Attention to WebXR?

With the advent of immersive technologies, the landscape of next-generation technology is moving towards mixed reality technologies like Virtual Reality, Augmented Reality, shifting a significant amount of attention to WebXR. Consequently, companies and product developers are developing Augmented Reality and Virtual Reality for various platforms in different industries. One of these platforms is the web platform.

With web technology and the internet becoming increasingly prominent, industries are shaping themselves to adapt to the world of the web and the internet. With more and more services available on the web each growing day, web technology is evolving rapidly as a front runner in the next technological revolution. WebXR is one of these technological evolutions. Bringing transformative technologies like Augmented Reality and Virtual Reality in the web platform, WebXR allows industries to harness the power and possibilities of these technologies.

With Augmented Reality (AR) and Virtual Reality (VR) constantly evolving and increasing in technological advancement and accessibility, industries across various spectrums and consumers alike are increasingly adopting these technologies. Furthermore, both consumers and industry giants are advocating in favor of AR and VR. Consequently, different companies and industries around the world are adopting AR and VR on various platforms. WebXR brings these technologies to the web, enabling web platforms to utilize AR and VR.

Read more: How We Built The 3D Model of Tesla Gigafactory

If you want to switch your attention to WebXR, you have to first know about WebXR. We need to know about AR and VR as well. AR or augmented reality is an immersive reality technology that developers use to build interactive experiences for their users.

AR is a technology that enables the development of immersive realities with real-world objects and environments through computer-generated elements, digital overlays, and sensory feedback. In addition, AR tech usually aims to blend these digital elements and information with the real-world environment so that the user can remain utterly immersive in this new augmented reality.

On the other hand, Virtual Reality (VR) is an immersive reality technology that enables building interactive experiences in a virtual environment and with virtual objects and environments. A VR system delivers various digital information, graphics, and sensory information/feedback such that the user feels that they are a part of the virtual world. Thus, it helps to provide the most immersive virtual reality experience to users.

WebXR is a transformative technology that brings these mixed-reality technologies to the web platform.

If you pay attention to WebXR, you’d also see that it provides AR and VR compatibility with web technologies like HTML, CSS, and JS. WebXR was previously categorized as WebAR and WebVR as the XR technologies currently are. However, developers behind WebXR combined WebAR and WebVR for a more straightforward and advanced way to integrate these immersive reality technologies in our browsers.

WebXR technology provides various functionalities to enable multiple features in web browsers. Most commonly, WebXR allows developers to detect if AR and VR are available in the browser or web client. If AR and VR are available, developers can query and know about the devices that enable and provide these technologies, i.e., AR and VR devices. Moreover, WebXR also allows developers to poll these devices and the input device status and information in association with these devices. More importantly, WebXR enables browsers to display graphics/imagery on these devices in a controllable manner to provide a complete AR and VR experience right from the browser.

Why is WebXR Important?

WebXR provides a standard solution to bring XR technologies (AR and VR) into browsers. With web frameworks like three.js, React360, and A-Frame, WebXR unlocks numerous possibilities and probabilities. These possibilities and probabilities not only open in a single device or platform due to the nature of web browsers, but the opportunities for XR technologies also arrive across various devices, different operating systems, and numerous browsers. Thus, it increases the accessibility of WebXR and XR technologies by a vast margin.

Even web developers who may not know AR and VR technologies fully with languages like C++ and C# can start with WebXR development since they know web languages. Moreover, it increases the accessibility among developers regarding XR technologies and consumers since most internet users use browsers to browse the internet. Hence, WebXR opens doors for massive amounts of users and developers towards XR technologies.

Moreover, due to WebXR being available through web technologies, the XR content will be more widely available, too, shifting everyone’s attention to WebXR. Since web browsers are available on almost all devices that can connect to the internet, WebXR enables AR and VR in these devices.

With the standardization of WebXR, various developers can now build XR technologies on the web for multiple platforms and devices.

WebXR even provides functionality to enable development similarly for devices that do not even have XR capabilities as devices with them. For example, WebXR allows applications to work on even a flat-screen, i.e., without XR support, allowing developers to develop similar users with XR devices and users without XR devices.

However, WebXR is not a rendering technology, nor it provides features for managing 3D data or knowing how to load a 3D model. WebGL and frameworks with WebGL provide such functionalities. Nevertheless, WebXR offers features to render images/graphics for XR with features like timing, scheduling, and handling various viewpoints relevant to different viewing and drawing angles.

With the continuous evolution of WebXR, it is increasingly becoming more and more influential. Across various industries and businesses, WebXR plays a vital role in their consumer platform, business, and even product development and innovation.  With consumers becoming more adopting and familiar with XR technologies, the consumer market for WebXR will increase drastically. Furthermore, since the consumer market for AR and VR is rapidly growing, WebXR will enable AR and VR among more consumers across different platforms and devices.

Apart from this, businesses that need AR and VR technologies can integrate WebXR to provide these services or features directly from web browsers. Businesses looking to expand their marketing and product innovation are adopting AR and VR technologies. With WebXR being a gateway for XR technologies, companies will need to adopt WebXR to look for a large audience to provide their XR experience. Alongside this, organizations and companies that need AR or VR for training, informative content delivery, And other usages can also adopt WebXR for ease of development and adoption.

Businesses looking to enhance their consumer experience with AR and VR will need WebXR to quickly develop and expand their services through XR on the web. Standard development and deployment will allow businesses to expand these XR technologies more cost-effectively, efficiently, and quickly. Developers will also benefit from WebXR since adoption in AR and VR technologies will increase demand for developers proficient in WebXR and web development. Even web developers can learn to develop in WebXR without knowing an entirely new platform of technology or language.

Companies like FS Studio are constantly using bleeding-edge technologies to provide innovative solutions and technology solutions to their clients. For example, one of the recent endeavors of FS Studio was to build a 3D model of Tesla GigaFactory in Austin, Texas, only through the use of cameras. The endeavor was a success, with the result being demonstrated by using a HoloLens device and hand tracking technology right in the browser. WebXR presented the 3D model with Tony Rogers, the director of Emerging Technologies at FS Studio, controlling and manipulating the 3D model. The result was a real-time finger tracking technology capable of managing the Tesla Gigafactory 3D model right on the browser with the help of WebXR. Roger also explains that the possibilities of WebXR are huge and will be a significant player for XR technologies and their development and adoption. With such immense potential, even though WebXR is in its early stages of development. A little attention to WebXR will enable many opportunities in all fronts of industry and consumer space when the technology becomes more mature. Currently, developers who want to create a full AR and VR experience utilizing the full capabilities of AR and VR devices may not meet their demands through WebXR. Instead, they are more likely to use UnrealVR or ARCore technologies. However, with WebXR’s promise and ability to grow into a fully mature technology, businesses, companies, or any industry player might want to keep an eye on the development of WebXR.